Edgar Allan Poets were born in 2006 at the behest of Chris Mariotti and Lop Noor who, after recording a demo in a remote cabin in the Dolomites mountains in northern Italy, gave birth to Noir Rock, a genre inspired by the works of Edgar Alla Poe and Alfred Hitchcock.

Their music is a mix of heavy guitars, classical strings, and lyrics that evoke stories shrouded in shadow and mystery.

In 2009, after an intense collaboration with Rhys Fulber, Edgar Allan Poets recorded their first album entitled “555”, full of dark and intense sounds. The physical album was kept secret until 2022 because only now Edgar Allan Poets think that the right conditions are in place to release it.

In 2016, Lop Noor left the band to embark on a new journey towards metal and was replaced by “The Shadow”, an artist whose identity is mysterious and arcane.

The Edgar Allan Poets are an alternative band that promotes a dark and intense sound that’s being called noir rock. Their music is a mix of grunge guitars, classical strings and lyrics that evoke tales shrouded in shadow and mystery. The Poets are two rock noir artists inspired by the works of Edgar Allan Poe.

Chris Mariotti from Italy. His family traveled a lot and part of his major locations included South Africa, Algeria and eventually, Los Angeles, California. It was during his life in Italy that the artist began taking his music seriously, playing guitar and composing.

The Shadow is The Poets’ other major member. From the Northern Lands, the drummer coincidentally lived in Italy for a while before landing in Los Angeles. He was studying music, getting a degree in piano. He’d actually met Chris Mariotti in Burbank, California, during an open mike event. Chris Mariotti had been through several bands before he and Shadow decided to form a group.

While Chris Mariotti and Shadow are the primary members of Edgar Allan Poets, they have also collaborated with many other musicians. With Chris Mariotti on the vox and guitar, and Shadow handling drums and keys, their deep admiration of Poe’s gothic work, as well as their mutual love of Alfred Hitchcock films, is evident, inspiring the direction and sounds of their work. 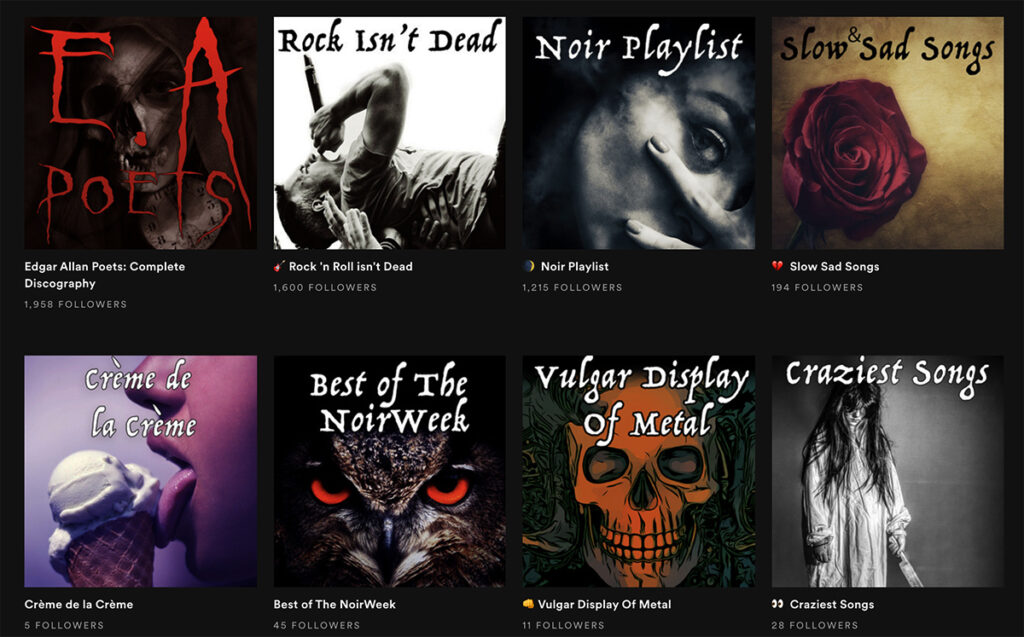 With comparisons to the music of Alice in Chains, Nirvana and Evanescense, the Poets have produced well received tunes like Cryptic Code and Crow Girl. It is a strong sound with a voice as unique as it gets. With many influences that include grunge, classic rock and Goth, the artists are constantly in search of sounds and elements that will keep their style in a class by itself. Noir rock is intriguing and obsessive, filled with imagery of naked fetuses, black feathers and merciless winds. Every track deserves more than one listen, and each one reveals something new.

Critics and fans do agree that if you enjoy Hitchcock movies and Edgar Allan Poe, the music of the Edgar Allan Poets and the world they want to share is more than worth a listen. It might even be worth two, and forever more.