These two images are displayed In the Andrei Pozdeev museum, side by side. It states: “(Left) Evgeny Stepanovich Kobytev in 1941 when he went to war. (Right) His Return in 1945.”

This is the human face after four years of war: a thin, tired face, deep wrinkles, a worried look, Yevgeny Kobytev was totally changed.

Evgeny Stepanovich Kobytev was born on December 25, 1910, in the village of Altai. After graduating from the pedagogical school, he worked as a teacher in the rural areas of Krasnoyarsk. His passion was to paint. The dream of higher art education came true in 1936 when he began studying at the Kyiv State Institute of Art in Ukraine. 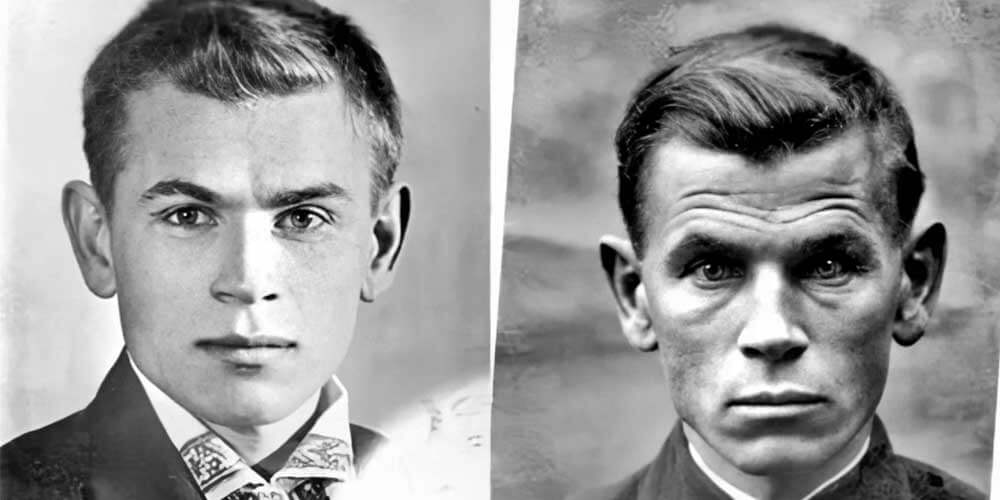 After graduating with honors from the art institute his dreams were interrupted on June 22, 1941, when Germany attacked the Soviet Union. He decided to volunteer to be a soldier. The artist joined one of the Red Army’s artillery regiments in order to protect the small town of Pripyat between Kyiv and Kharkiv.

In September 1941, Kobytov was wounded in the leg and became a prisoner of war. He ended up in the German concentration camp called “Khorol pit”. About ninety thousand prisoners of war and civilians died in this camp.

Kobytev managed to escape from captivity in 1943 and rejoined the Red Army. He took part in military operations in Ukraine, Moldova, Poland, and Germany.

After World War II ended, he was awarded the Hero of Soviet Union medal. However, the High Command refused to award him the medal of victory over Germany. His military career was “ruined” as a result of being a prisoner of war.