We are honored to share with you the original letter we received today from the #WhiteHouse about our last music video “Watch”.

The White House, Washington
Dear Christian:
Thank you for sharing your story. When I ran for office, I promised to be a President who upholds the sacred trust between the Federal Government and Indian Country; a President who respects tribal sovereignty, upholds treaty obligations, and works with tribal nations in a spirit of true partnership and mutual respect. Today, honoring our nation‑to‑nation relationship isn’t the exception—it’s the rule. And we have a lot to show for it. 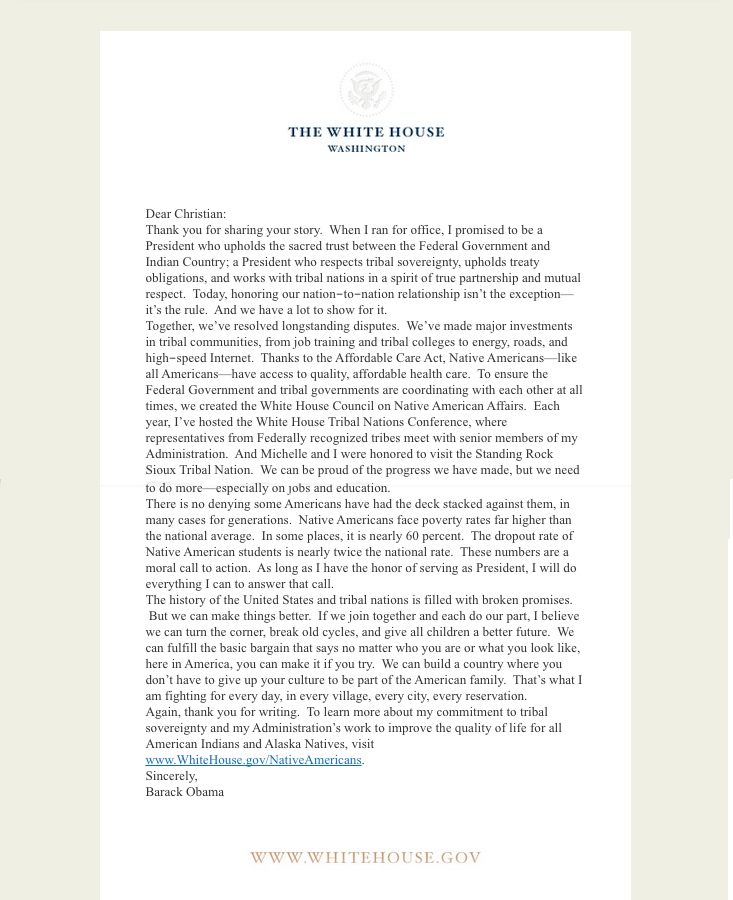 Together, we’ve resolved longstanding disputes. We’ve made major investments in tribal communities, from job training and tribal colleges to energy, roads, and high‑speed Internet. Thanks to the Affordable Care Act, Native Americans—like all Americans—have access to quality, affordable health care. To ensure the Federal Government and tribal governments are coordinating with each other at all times, we created the White House Council on Native American Affairs. Each year, I’ve hosted the White House Tribal Nations Conference, where representatives from Federally recognized tribes meet with senior members of my Administration. And Michelle and I were honored to visit the Standing Rock Sioux Tribal Nation. We can be proud of the progress we have made, but we need to do more—especially on jobs and education.
There is no denying some Americans have had the deck stacked against them, in many cases for generations. Native Americans face poverty rates far higher than the national average. In some places, it is nearly 60 percent. The dropout rate of Native American students is nearly twice the national rate. These numbers are a moral call to action. As long as I have the honor of serving as President, I will do everything I can to answer that call.
The history of the United States and tribal nations is filled with broken promises. But we can make things better. If we join together and each do our part, I believe we can turn the corner, break old cycles, and give all children a better future. We can fulfill the basic bargain that says no matter who you are or what you look like, here in America, you can make it if you try. We can build a country where you don’t have to give up your culture to be part of the American family. That’s what I am fighting for every day, in every village, every city, every reservation.
Again, thank you for writing. To learn more about my commitment to tribal sovereignty and my Administration’s work to improve the quality of life for all American Indians and Alaska Natives, visitwww.WhiteHouse.gov/NativeAmericans.
Sincerely,
Barack Obama