The first postage stamp designed by an Alaskan Native American is inspired by the legend of the raven that stole the light and it is simply astonishing.

A tale by the Tsimshians, Native Americans settled between British Columbia (Canada) and Alaska (USA), tells the story of when “Raven” stole the light to give it back to the world.

An old leader of men had stolen the most important lights in the world: the Sun, the Moon and the Stars and put them in three black sacks which were opened only for his pleasure. Raven, however, had grown tired of flying around in the dark and decided to bring light back to the world. He turned into a leaf among those that swirled in the wind above the tepee and entered the tent down the smoke hole.

The Chief’s daughter was drinking and she didn’t notice the leaf that had fallen into her bowl, so she swallowed it. The girl became pregnant and, after 9 months, she gave birth to a baby with raven hair and dark, glowing eyes. He was of course called “Raven Child”.

Baby Crow was very temperamental and when he got bored he would scream and yell, he seemed to croak. The Chief, hated those noises so he ordered the tribe to give the child what he wanted. Therefore Raven Child found the sack with the Stars in his hand. He began to play and bounced those balls of light all over the teepee until one day, by accident, they all bounced out of the smoke hole, returning to provide some light to the world.

The Chief was very upset, but even more angry was Raven Child who, having lost the stars, began to cry and scream again. Once again the Chief ordered the tribe to give the baby what he wanted, so Raven Baby got the sack with the Moon. He was happy again and he started playing with that ball of white light, with great enthusiasm and skill he ended up blowing it out of the tepee from the smoke hole. The Moon then returned to its place among the stars and the night was no longer so dark. 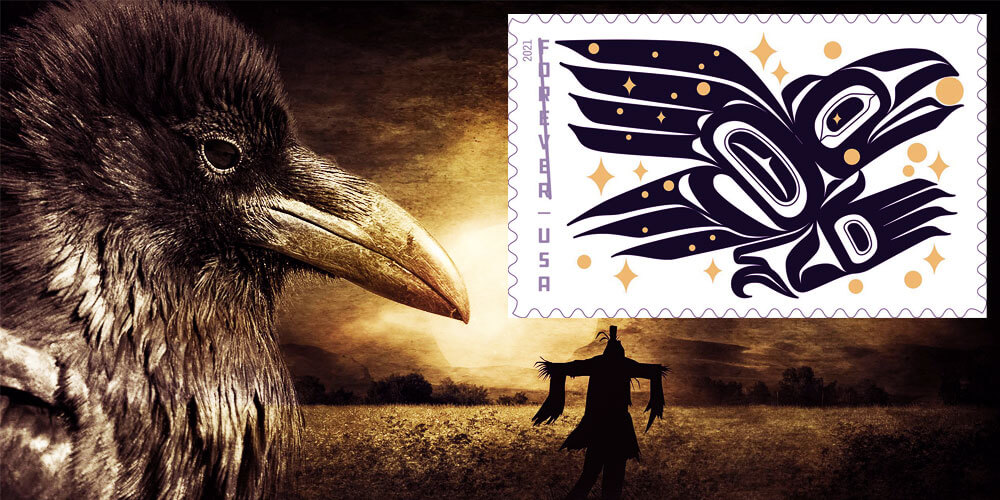 Again the Chief got very angry. But, once again, the angrier was Baby Raven who had lost his wonderful toy. The cries and noises were excruciating and the Chief could no longer tolerate them, so he ordered the tribe to give him what he wanted. The people could not take anymore Baby Crow and, fearing the wrath of the Chief if he had lost the Sun too, tried to make him play with the most disparate things, but Baby Crow was crying and pointed to the last dark sack.

In the end they were forced to give him what he wanted but he was advised not to lose this light too, which the Chief cared very much about because it was one of his greatest treasures. When they gave the Sun to Child Crow, however, he did not start playing, but instead, he transformed himself into a Crow and, taking the sack with the Sun in his beak, he flew out of the smoke hole. Once the sack was opened, the light spread through the world, putting an end to that perpetual night.